The offensive passing game in American Football is very complex. There are certain routes that receivers can run that are designed for specific coverages that the defense is lined up in. There are two different coverages when defending a pass, man or zone.

Man coverage is just how it sounds, one guy standing in front of a wide receiver, mirroring his every move.

Zone coverage is when the defenders drop back into specific areas on the field.

When throwing against man-to-man defense there are specific routes that can exploit that matchup. Any route with quick cuts would be effective against man coverage. This is because on defense, you are running backwards reacting to what the offense does, so its hard to keep up with fast guys.

There are several ways to tell if a player is lined up in man coverage prior to the snap of the ball.

Knowing what coverage the defense is in can help a play call be successful. If the quarterback notices a defender man coverage and the route is designed to beat zone, he has an opportunity to audible and change the route for the receiver.

Now just because the defender is lined up across from the receiver, doesn't necessarily mean that they are in man coverage. So what the quarterback will do to ensure that he knows the coverage is call a motion before he snaps the ball.

This motion will move the defender to another spot on the field. If the defender follows him there, that means the defense is in man coverage.

There are some routes that are perfect for exploiting man to man defense. If the quarterback notices a mismatch and hes already identified man coverage, the offense should make the receiver go deep for a big play, because there is a chance the defender won't be able to keep up.

On this play, there was only one defender back deep, the safety, and with man coverage on both receivers, if offense just attacked that safety and the quarterback then chose the man who was left one-on-one.

Zone coverage is a little bit harder to identify but usually you can tell in the way that the defender is standing across from the receiver.

In the image below, you can tell that the defender is lined up in an inside shade, where he is not ready to mirror the receiver step for step. So that usually tells you that he won’t be moving very far from that spot.

There are times when defenders are lined up directly across from receiver and they are still in zone, so what a quarterback will do, you guessed it, another pre-snap motion.

If the defense just shifts over, and nobody actually follows the player across the field, it usually means the defense is in zone.

SInce the defenders are in their designated spots when in zone, offenses will try and find those areas where there is no defender and exploit that spot.

In this clip above, there is only a single defender over the top, so there is a lot of open space on both sides of that last defender. Sometimes the quarterback has to anticipate these areas to be open. If the quarterback makes the wrong read, it could end up as an interception, so the pre snap motion can really help him know what coverage the defense is in.

So there are several ways to reveal zone and man. Whether it is paying close attention to how the defender is lined up across from the receiver, or you can use a pre-snap motion to see how the defense adjusts.

Of course, it gets more complex as defenses can disguise different looks, but that is for another lesson! 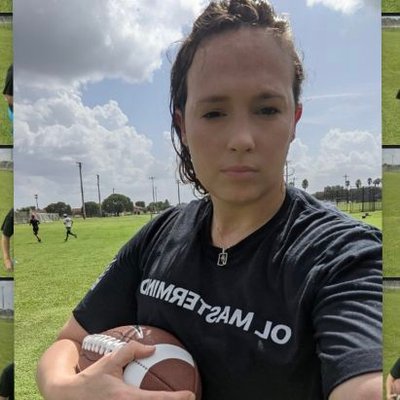